When I began researching the YouTube giveaway scams, I expected to find a cold trail. It has been over a year since ThioJoe, a tech news and education channel with nearly 3 million subscribers, posted his first video on his experience trying to remove hundreds of impersonators from his videos. Five months later, after Marques Brownlee made a video on the topic, YouTube began taking tentative steps to address the issue. But a quick Reddit search reveals that YouTube impersonators and giveaway scams are still alive and well today.

How does the scam work?

The scammer sets up a YouTube profile copying the real creator’s profile picture and name. Sometimes the method used to impersonate the channel name is quite clever, such as using foreign characters to create a look-alike, or simply misspelling the name in such a way that our brain is likely to auto-correct it. 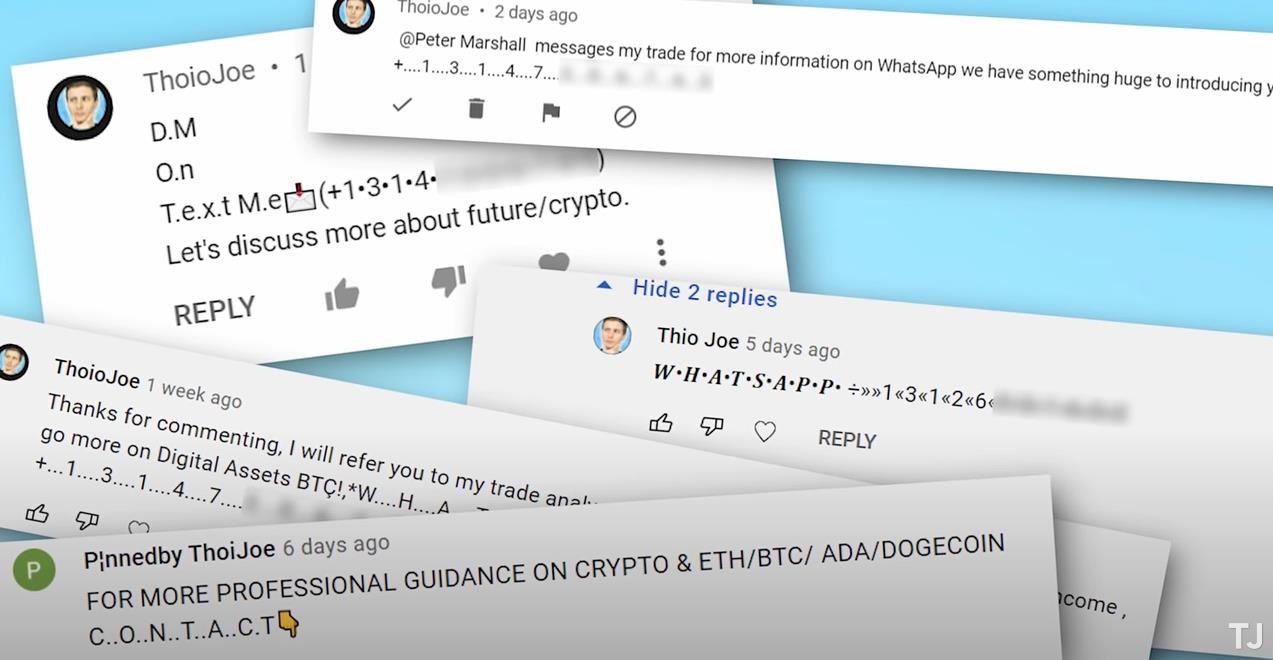 Other times, the channel name should be an instant giveaway (no pun intended).

Once on Telegram, the “winner” is often asked to pay for shipping. In the example below it is a ridiculous amount - $95 - that keeps going up as long as the victim keeps sending money. As soon as the scammer has fleeced one victim or one YouTuber’s channel for everything they can get, they simply change their profile picture and channel name and move on. 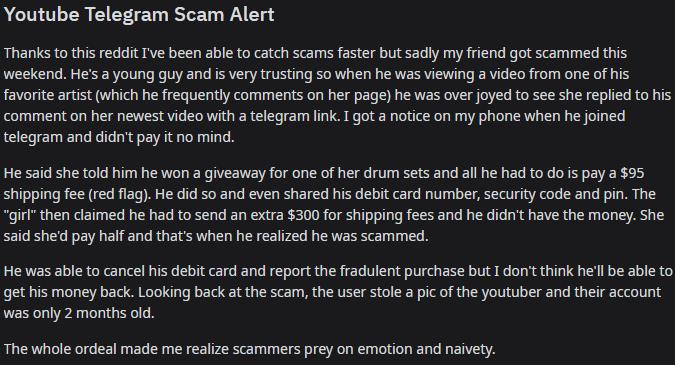 Who falls for this?

Unfortunately, naïve people whose emotions get the better of them and who are elated to have won something from a creator they look up to. If they were to click on the commenter’s name they would discover that it is not the same channel - not even close.

These impersonations aren’t even that well done or hard to spot, which is even more frustrating to the creators who wonder why YouTube isn't doing something.

If someone has established an identity on YouTube across tens, hundreds, or even thousands of videos, has shown their face, and maybe even has that Verified checkmark next to their channel name, then someone using their exact profile picture and commenting in their videos claiming to be them should be an easy target for YouTube’s algorithm to expunge. Right?

What if they also wrote hundreds of comments on a single video claiming to give away free stuff in a manner that directly violates YouTube’s Contest Policies? Wouldn’t it be an easy ban for YouTube to enforce?

And once the channel was banned for scamming, wouldn’t their hundreds of scam comments be automatically deleted from the platform?

If you answered NO to all of the above then your perception of YouTube’s current capability of handling these scams is sadly accurate.

ThioJoe thoroughly documented his experience reporting the scammers to YouTube. YouTube refused to ban several scam channels impersonating him, claiming that “for the rest of the channel[s] that you reported we have confirmed that it didn’t violate our community guidelines.” ThioJoe checked the channel that YouTube refused to ban, and found it had moved on to spamming other accounts with its WhatsApp scam. So he followed up, linking to the videos where they were active and sending screenshots. YouTube responded: “our team actually checked these channels against our guidelines on impersonation and they confirmed that those channels didn’t violate our Community Guidelines.” Right.

And even for those channels that were banned, their hundreds of scam comments - the crux of the issue - were not removed. That was up to the YouTuber to do manually, comment by comment, video by video. ThioJoe discovered some impersonator accounts that had left over 200 comments on a single one of his videos.

Realizing that YouTube was not going to help him, he made his own app to bulk-delete spam comments - free for anyone to use.

So yes, there’s a fix. Just not by YouTube.

In April 2022, five months after ThioJoe posted his original video detailing the scams, and shortly after Marques Brownlee - a much larger YouTuber - posted his, YouTube began testing a stricter content moderation tool for creators. On June 30th they released an update disabling the option to hide your subscriber count and limiting the type and/or frequency of special characters in channel names.

It’s a start, but it’s not enough. While researching this article I learned that fake SpaceX channels have been popping up on YouTube and running cryptocurrency scams. One got shut down about a month ago.

So I searched for SpaceX on YouTube, and lo and behold, SpaceX LIVE was livestreaming!

I left this stream running in the background while I worked.

A week later it has been taken down.

What can we do?

With YouTube forcing subscriber counts to show, it should be quite obvious when a commenter’s account is an impersonation of the creator whose video you’re watching. However, in cases such as the fake SpaceX LIVE livestream, the channel probably used bots to get a legitimate-looking subscriber count.

YouTube’s contest policy explicitly states that you must have official rules for the contest. If the creator hasn’t mentioned that they’re doing a giveaway…then they’re not.

In general, use common sense. If they’re asking you to give something to get something, don’t. You can always post a screenshot to /r/Scams to get another opinion.

In the meantime, creators will continue to suffer as the mysteries of YouTube’s algorithms rampage across the platform, striking original, legitimate videos and sparing scammers their comeuppance.

The Optus Breach: How Not to PR

An overview of the Optus Breach so far: what happened, how Optus responded to victims of the breach, ...

2022 has been a year of tech giants getting breached. Human culpability continues to be, for the most ...

The First American Corporation data leak in 2019 left thousands of customer's data unprotected. What happened, and what ...